Detours on the Literary Traveler’s Road

Posted on June 7, 2021 by thegumbodiaries

Visiting a site I’m researching for my book often propels me on a different path. I’m suddenly rushing to the library or bookstore or logging on to Amazon.com to find a book someone has recommended about the place or the writer. Nearly a hundred authors are included in A Literary Traveler’s Guide to the Gulf South: From Bay St. Louis to Apalachicola, and I’m trying to read something by each of them, even if it’s a small portion from google books or Project Guttenberg.

The trouble is – a snippet isn’t enough. Just reading a few paragraphs or pages doesn’t satisfy my quest for thorough documentation. Plus, my love of a good story gets in the way. I justify the hours I spend reading (rather than writing) by saying “it’s research for my book.” That allows me to curl up with a good book with the best of intentions. Besides with ninety-eight writers included in my manuscript, I’ve got some serious reading ahead to live up to my introductory remarks, “For each new author I discovered, I read one of their books, short stories, essays, or poems.”

To be honest, I get sidetracked and usually read several or the entire series.

Beginning near the east, the Apalachicola part of my title parameters, I’ve discovered:

Flight Patterns by Karen White. In this mystery, the main character, an expert in china patterns, returns home to Apalachicola after a decade’s absence. The author deftly takes the reader on walks around Apalachicola viewing the sites – along the waterfront, from parks to piers, to the library and museum. Her descriptions of locations are so detailed, a reader can almost smell the exotic fragrance of the pittosporum or find the fictional house overlooking the bay where the main character’s family lives. The plot adds even more local color as it features beekeepers and tupelo honey. That’s a great clue to the title’s meaning.

Author Michael Lister captures most of my reading time. I’m fascinated with his John Jordan clerical detective series. A two-time Florida Book Award winner, Lister lives in Wewahitchka and has set almost all of his thirty-plus books in the area. As a former prison chaplain himself, Lister brings authenticity to his “Blood” series which features prison chaplain John Jordan in gritty and realistic, yet touching and philosophical reading. I’m so in awe of Lister’s series I even bought an out-of-print first edition transformed into Christmas art to support Lister’s philanthropies. 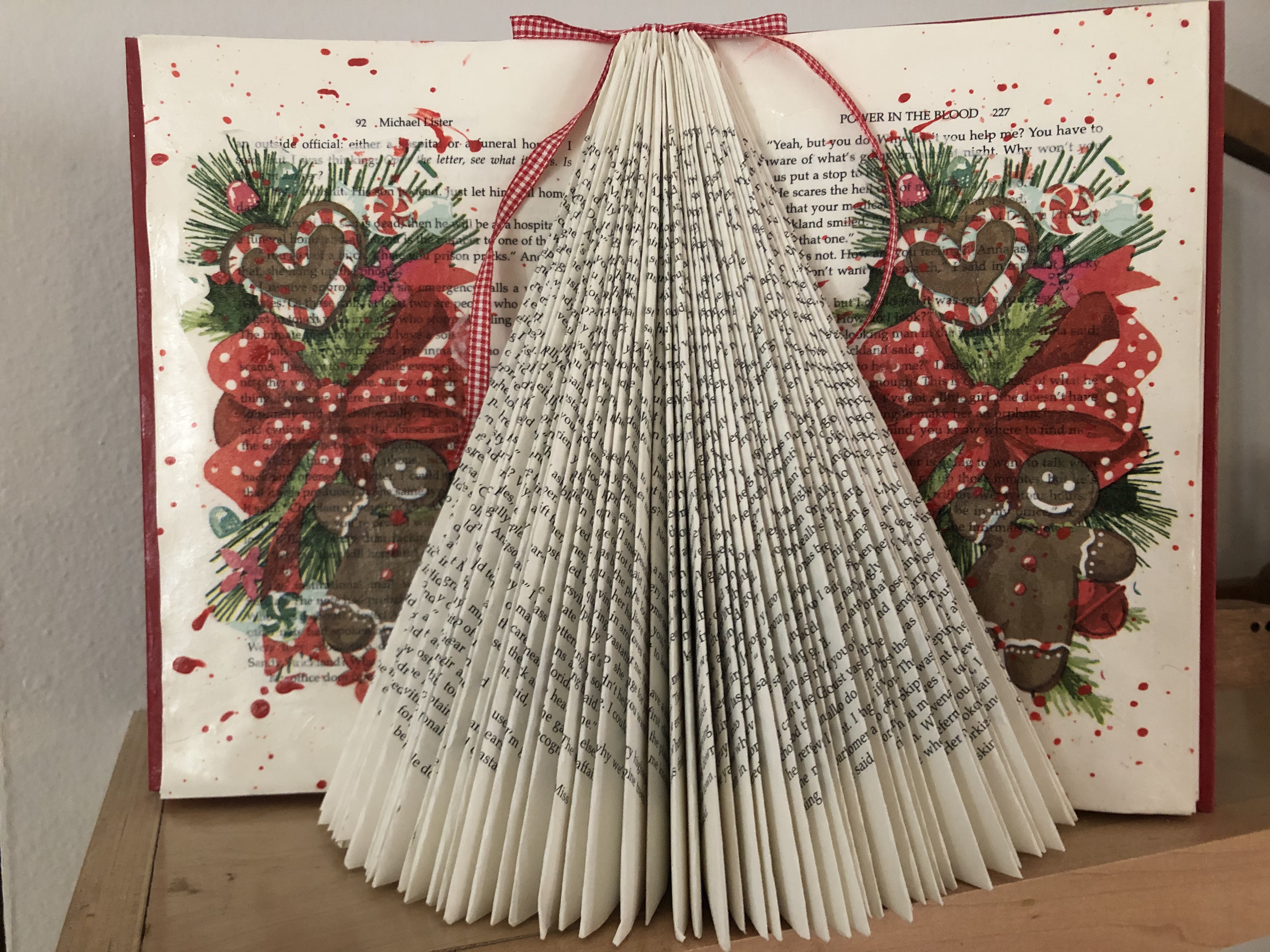 “The Still Waters” suspense series is co-written by Dawn Lee McKenna and Axel Blackwell. I asked for these books for Christmas and was so involved with the main character that I finished reading all three books before New Year’s Eve. The character, interim Sheriff Evan Caldwell, lives at the Port St. Joe Marina. Grieving the hospitalization of his comatose wife, he survives on grouper sandwiches from the nearby Dockside Café. (Both the marina and café were destroyed in Hurricane Michael in 2018.) He is a “reluctant” detective, working to pay his wife’s hospital bills. I anxiously await the fourth book in the series to see how the team of authors deals with the aftermath of the hurricane and the main character’s inner turmoil.

Claire Matturro’s Smuggler’s Daughter was recommended by both the bookseller in Apalachicola and a writer-friend who shares the same publisher. The book’s setting along the Florida Gulf Coast is rich with lonely beach nights, swamps, sinkholes, and a frightening snake-bite chapter. It kept me reading into the wee hours of the night. The past deeds of the main character, a reference librarian, have her living in fear twenty years later. Detectives, childhood friends, and teenage enemies all play a role in the murders of the state attorney and a lawyer, plus a hit and run victim.

Back on track, I recently visited Beauvoir, Jefferson Davis’ last home located on the Mississippi Coast. After that visit I rediscovered Charles Frazier, award-winning author of Cold Mountain. I had read Cold Mountain the year it won the National Book Award, and, of course, I saw the film version starring Jude Law. When I learned Frazier had written an historical fiction novel of Varina Davis’ days following the end of the Civil War I rushed to the library – eight minutes before closing — to check out their only copy and see if Beauvoir was mentioned. I was hooked from the first page. Frazier’s unique account of Varina’s last years revolves around a series of conversations with Jim Limber, Jefferson and Varina Davis’ adopted black son. Varina is reunited with Limber and tries to help him piece together his past while telling her own story. I loved reading Varina and now I’m off to find a copy of a book the Beauvoir tour guide recommended, The Mysterious Life of Jim Limber.

1 Response to Detours on the Literary Traveler’s Road