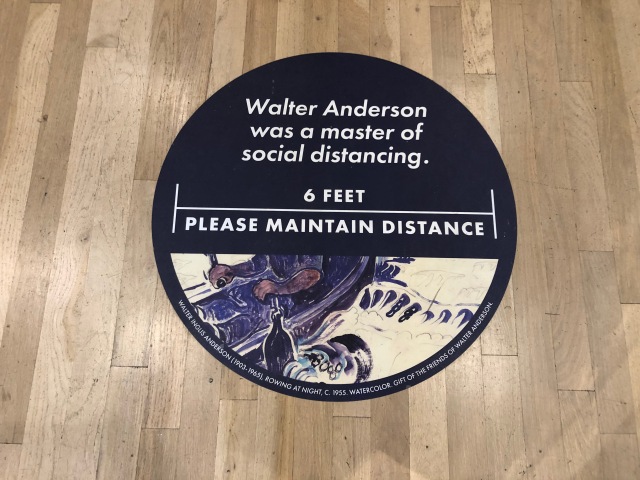 “Walter Anderson was a master of social distancing.”  That clever six-foot warning adhered to the floor of the Walter Anderson Museum of Art gave me one of the best belly laughs of the pandemic. Yes, that man rowed a dinghy eight miles a day to socially distance.

I saw the sign during a recent visit to Ocean Springs, Mississippi, when researching A Literary Traveler’s Guide to the Gulf South: From Bay Saint Louis to Apalachicola.  I’d always heard about the artist Walter Anderson (1903-1965) from my mother, also an artist. Only when I began working on my book did I think of him as a writer.

Ocean Springs is a sleepy little town with sprawling oaks, a tree-lined business district, cute shops and galleries, and a quaint harbor. It’s been a popular place with artists and writers for decades.  One of its greatest assets is the Walter Anderson Museum of Art. The museum features the work of Walter along with his modes of transportation – boat and bicycle. Within the museum is “The Little Room,” A painted room relocated from his studio cottage at Shearwater Pottery. Every inch of the room –ceiling to floor to windowsills and walls—is illustrated.

Seeing the museum, Walter’s massive historic-cultural murals in the attached Community Center and his brother’s art in the old high school makes an Ocean Springs visit well worth spending a day.  I also stopped at Shearwater Pottery, the Anderson family business, for a quick visit to look at their pottery creations. Along with pottery of every shape and purpose, they have a niche museum of their history, and gifts and books for sale.

Museum of poettery creation with new items for sale

Walter Anderson moved to Ocean Springs after studying at prestigious northern art schools (one is now Parsons School of Design). In Ocean Springs, he worked in the family pottery business.  On and off, he traveled the South, bicycling hundreds of miles – Tennessee, Florida, Kentucky. He wrote about these regional excursions and his travels to Hong Kong.

Nearby settlement Gautier (pronounced Go-Chay), about twelve miles to the east, also played an important role in his story as a writer.

While recuperating from hospitalization for mental illness, Anderson, his wife and children lived at Oldfields, an antebellum home on the Mississippi Sound in Gautier. No longer working in the family pottery business, he farmed and entertained his children with art and stories. From Oldfields, he’d launch his boat and row or sail the eight miles to the Horn Island wilderness to paint, write in his logbooks, and study nature. He’d often spend days at a time observing the island’s creatures – crabs, insects, birds — at times seeking shelter from storms by beaching his boat and climbing underneath it. These experiences are recorded in The Horn Island Logs. The book, published posthumously, is a record of his life, experiences, and observations of nature on Horn Island, the largest of the four barrier islands off the Mississippi coast. 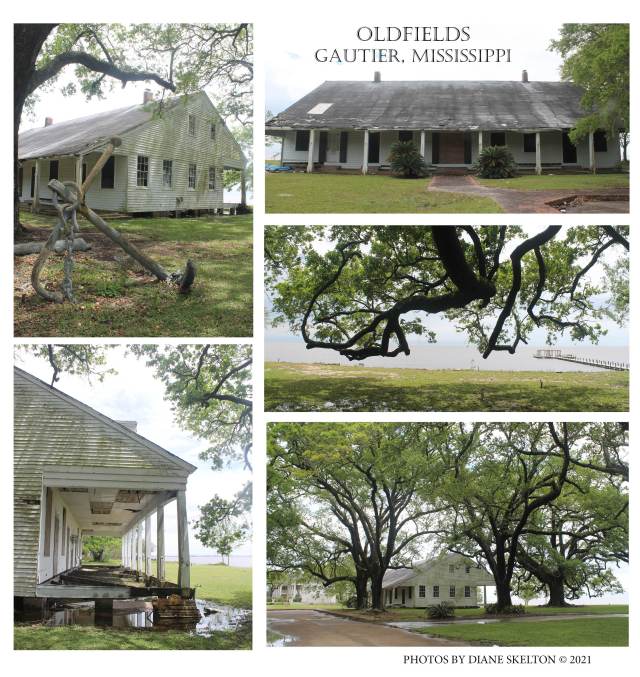 From a visit to Oldfields in April 2021

Oldfields, originally a pecan plantation, belonged to his wife’s family. His wife, Agnes “Sissy” Grinstead Anderson (1909-1991), a poet, wrote the memoir Approaching the Magic Hour: Memories of Walter Anderson. His daughter Leif Anderson (1944- ), a dancer and artist, wrote Dancing With My Father and Dancing Through Airth.

Officially known as the Lewis-Oldfields House, the abandoned homestead is on the state’s list of Ten Most Endangered Historic Places.  Severely damaged in Hurricane Katrina, it is located at 1901 Water’s Edge Drive in Gautier.

It’s right at the end of the 1970s’ style subdivision on a bluff overlooking the Sound. Glorious in its decay, Oldfields was purchased in December 2020 by the Mississippi Historic Trust.

When I stopped to verify the location for my book, I was able to walk around the property. From the back yard I could see the islands across the sound. To stand on the rise and think about Walter Anderson rowing to study nature and write was enchanting. I understand now why watercolorists tour Horn Island to recapture that magnificence of nature – far from society.

Horn Island is part of the Gulf Islands National Seashore and accessible only by boat. It is a designated wilderness area, but private tours, like for those for watercolorists, are available with authorized commercial operators listed on the National Park Service website or at the Gulf Islands National Seashore office at 3500 Park Road, Ocean Springs. Or you can take your own boat.

Now that government properties are reopening after COVID, I plan to go back to Gautier to visit the Sandhill Crane National Wildlife Refuge.  In 1944, Anderson, a visionary environmentalist, recorded log entries describing a walking tour north of Gautier to a colony of sandhill cranes. In 1975, ten years after Anderson’s death, the U.S. Fish and Wildlife Service established the Mississippi Sandhill Crane National Wildlife Refuge for the endangered Mississippi Sandhill Crane and its disappearing wet pine savanna habitat. Only about 100 of the cranes are still in existence, and the bird is considered the rarest in America.  Anderson’s painting of the sandhill cranes at dawn adorn a portion of the east wall in the artist’s “The Little Room” in the museum. I’d like to be inspired by seeing the real sandhill cranes and write about them too.