Posted on October 18, 2021 by thegumbodiaries

The most picturesque and historic literary site in the Florida Panhandle is the quaint town of DeFuniak Springs. Sprawling across I-10 (the northern geographic boundary of my book A Literary Traveler’s Guide to the Gulf South), DeFuniak Springs began as a Victorian-era cultural retreat.  Most of its original buildings still stand as a tribute to the power of learning.  Dozens of Victorian homes, a library, meeting hall, churches and a massive park encircle a lake where row boats once ferried lovers of the written and spoken word to the evening readings and lectures of “Chautauqua.”

DeFuniak Springs is about an hour’s drive east of Pensacola along I-10 or thirty minutes north of Scenic Highway 30A and the towns of Seaside and Santa Rosa Beach. Local legend has it that a Pensacola and Atlantic Railroad executive on a train excursion looking for a site for a resort town spotted a lake, nearly a mile wide in a perfect circle, from his rail car.  He stopped the train and declared the wooded lake the ideal locale. It quickly acquired its name DeFuniak in an employee naming contest. When the railroad learned the Chautauqua Institute of New York was looking for a winter retreat location, a resort-railroad partnership materialized. Naturally, the railroad would transport travelers directly to their cultural-vacation stop.

The Chautauqua Movement, which began at Lake Chautauqua in New York State, encompassed four elements — arts, religion, education, and recreation. Individuals participated in programs, and, in turn, the knowledge they gained benefited their communities. The Florida Chautauqua Association was formed in 1884 and from 1885 to 1928 as many as 4000 passengers a day stopped at DeFuniak Springs for the Chautauqua experience. The DeFuniak season ran for seven weeks, and people would come for days or weeks for the vibrant lectures and lessons.  Popular lecturers drew crowds who stayed in the glamorous Chautauqua Hotel. Travelogue speakers, dressed in costumes, projected stereopticon (not too unlike a slide show or Power Point) images and drew crowds as did concerts. Others came for courses like The Chautauqua Literary and Scientific Circle classes taught on the campus. And, of course, for recreation they rowed and sailed the lake.

Some New York Chautauqua members liked the area so much they built Victorian houses around Lake DeFuniak. Quickly, the campus grew with buildings including an auditorium that seated 4000. The library backing up to the lake is the oldest public library still standing in Florida.

A leisurely stop at DeFuniak Springs offers a step back in time and a peaceful, restorative break from our pandemic world. Just writing about it is relaxing as I savor the memories of a pre-COVID visit in 2019. Since we were there, the walking tour has added large placards with detailed history of each of the 17 stops on the tour.

Begin at the historic DeFuniak train depot, where orchestras once met passengers arriving for the Chautauqua. You can get a brief personal introduction and take a walking (or driving) tour of the town to enjoy the places where thousands roamed the grounds in the 19th century. 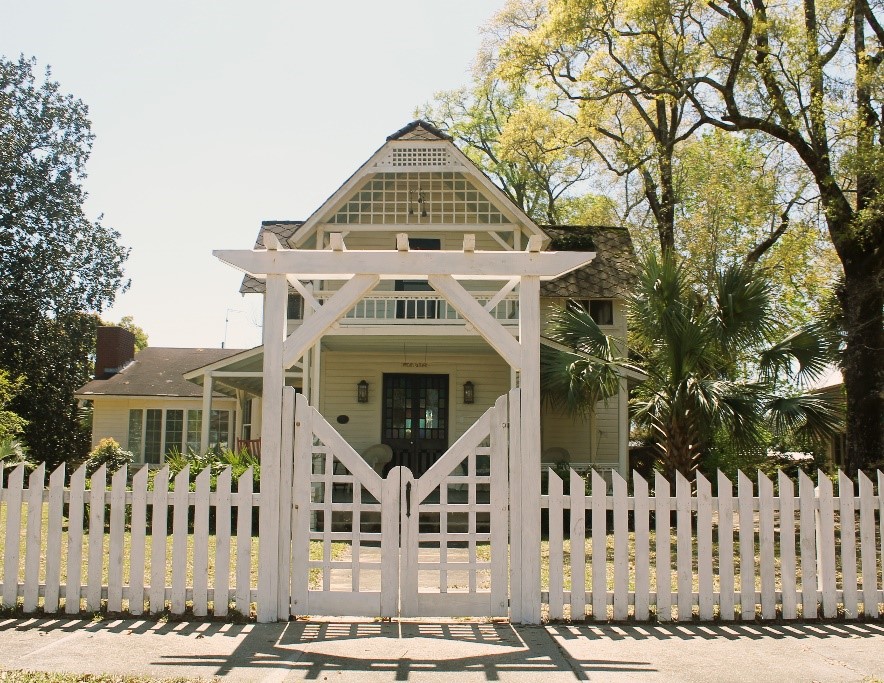 Dream Cottage, 404 Circle Drive: Wallace Bruce (1844-1914), Yale-educated and an early president of the DeFuniak Chautauqua, was also an established poet. At one time, while living in Scotland, he served as Poet Laureate of the Masonic Lodge of Canongate of Kilwinning. His works include the poem “Parson Allen’s Ride” (1875), one of several which he would deliver to audiences, The Land of Burns (1878), The Yosemite (1880), The Hudson (1882), The Long Drama (1883), From the Hudson to the Yosemite (1884), Old Homestead Poems (1888), and Wayside Poems (1894). His work also appeared in Harper’s Weekly and Blackwood Magazine. 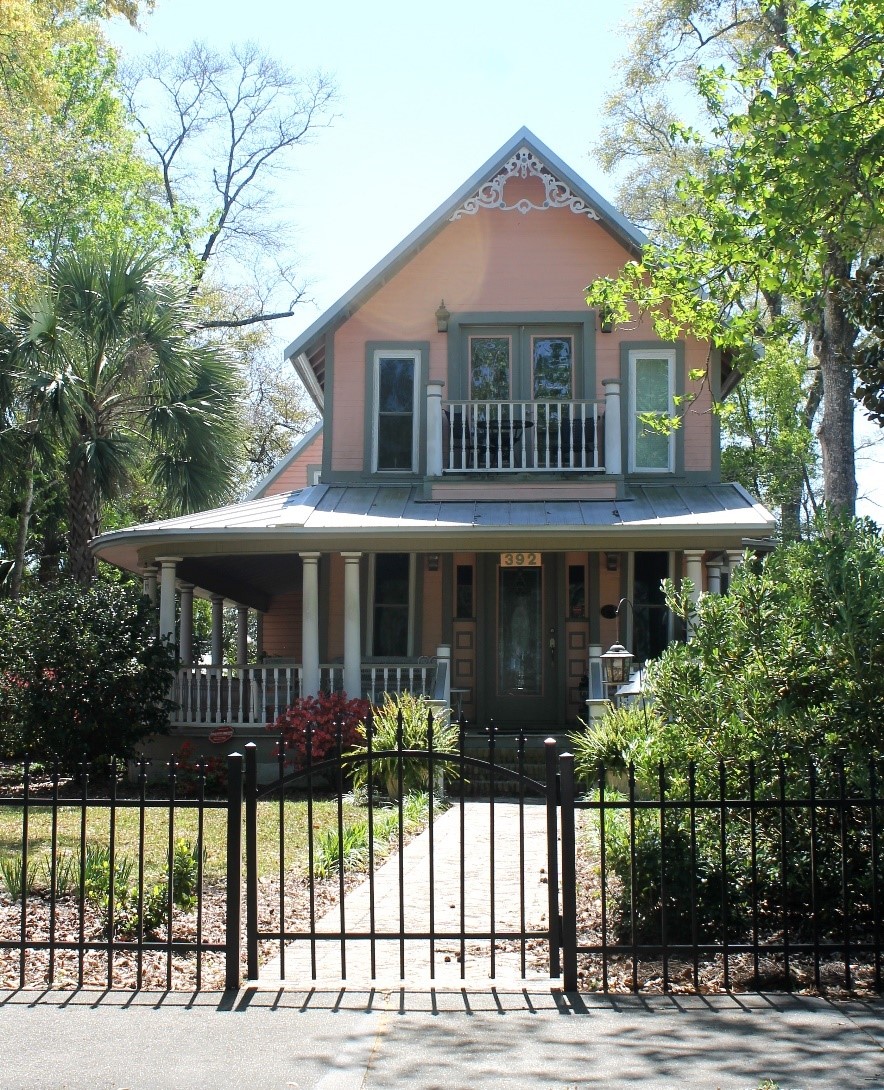 Pansy Cottage, 392 Circle Drive: Isabella MacDonald Alden (1841-1930), writing under the pen name Pansy, wrote over 100 children’s books beginning in 1865 with Helen Lester to 1931 with her posthumously published memoir Memories of Yesteryear. She was immensely popular during her time selling as many as 100,000 books annually, with copies translated into several languages. She co-edited a children’s magazine, Pansy, with her husband G. R. Alden, a pastor. The books are Christian faith books for young female readers.  Several, including Four Girls at Chautauqua, are available on Amazon and in Kindle format. You can read her first book for free at https://www.isabellamacdonaldalden.com/helen-lester.html 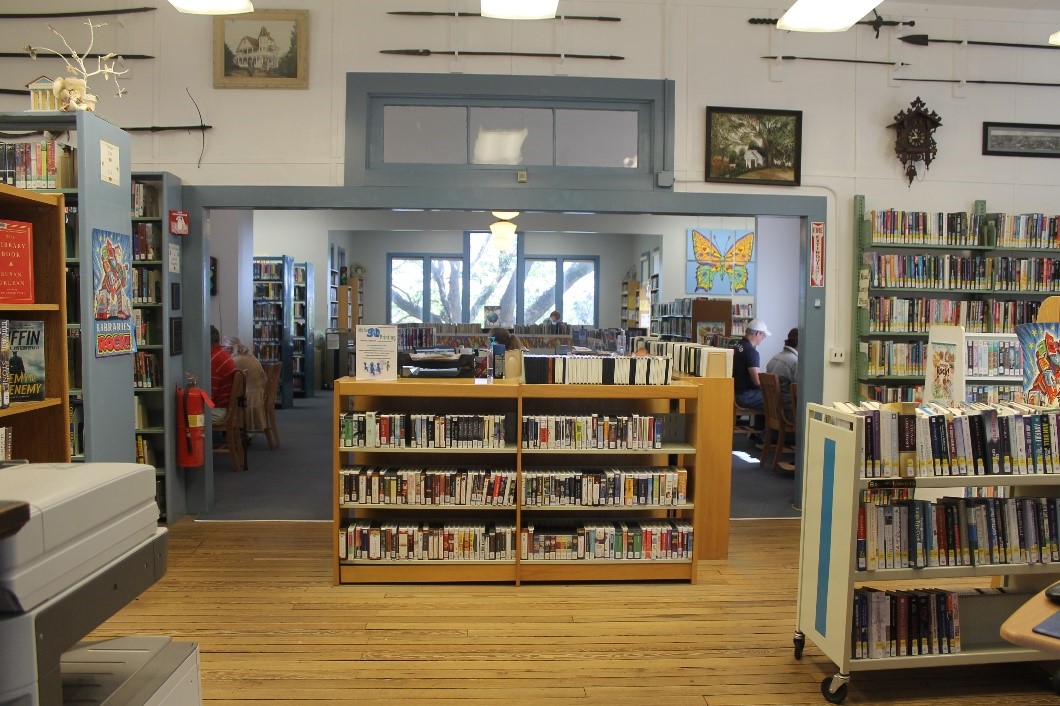 The DeFuniak Library, 3 Circle Drive, which opened on December 20, 1887, has never closed. Even 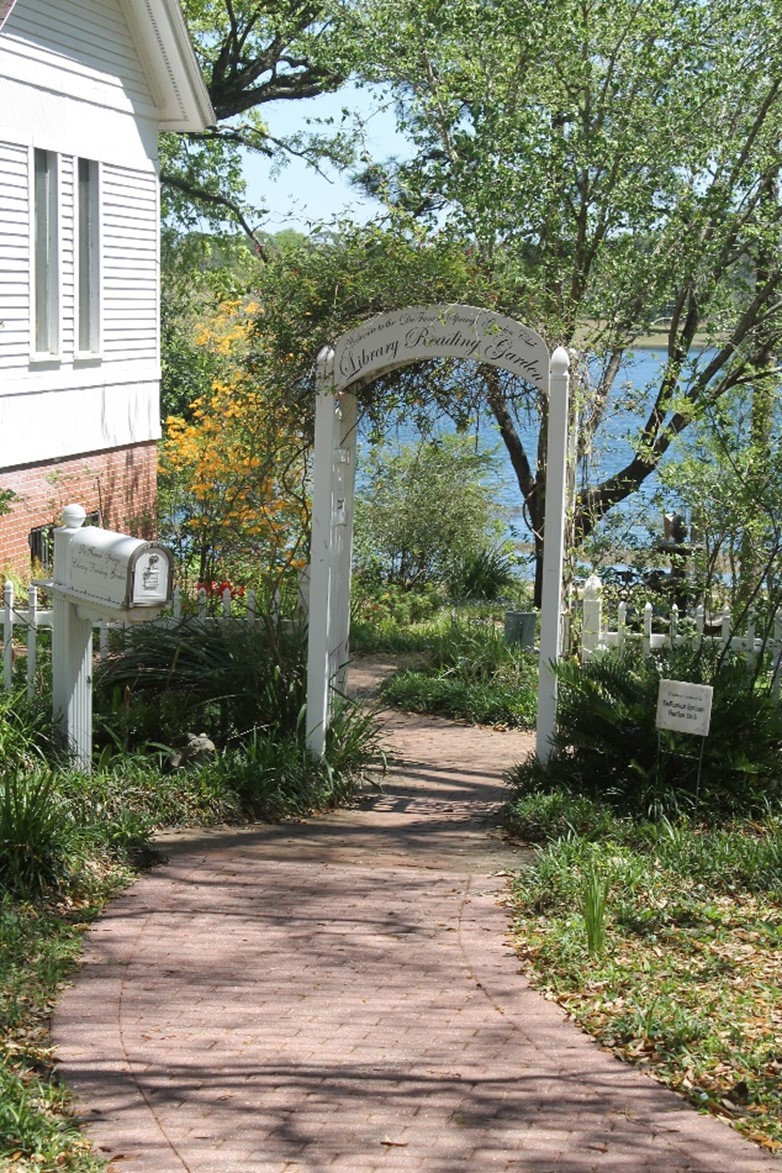 when Chautauqua assemblies ended in 1928, it continued and is now operated by the city.  The library blends the new with the old – antiques sit adjacent computers and look perfectly at home. At the entrance is a large antique Regina Music Box that plays notched metal discs.  Librarians will play it for you, if you ask. Fellow writer and traveler Pat Black-Gould says there’s also a signed, first edition of To Kill a Mockingbird. Author Harper Lee was friends with the librarian and inscribed the book with a Christmas greeting. For years patrons could check out the book. Now it’s protected in a glass case.

Adjacent to the library is a lovely Library Reading Garden, a place to sit and read or think or just enjoy the lakeview.

In its heyday, popular writers who visited DeFuniak Springs for Chautauqua events included Harriet Beecher Stowe, author of Uncle Tom’s Cabin; Juliet Ward Howe, poet best known for writing “The Battle Hymn of the Republic”; and Cincinnatus Heine Miller, the “Poet of the Sierras,” who wrote under the pen name Joaquin Miller.

The Florida Chautauqua Assembly, quiet for several decades, has revitalized and is again offering programs at its DeFuniak Assembly Hall. They had hoped for a four-day educational program for families on the Roaring Twenties in 2022. Sadly, due to COVID, it’s been canceled, but  I’m following their website and Facebook, ever hopeful the Chautauqua revival continues.

On the search for the perfect gumbo!
View all posts by thegumbodiaries →
This entry was posted in Uncategorized and tagged chautauqua, DeFuniak Springs, florida writers, Harriet Beech Stowe, Literary Travelers Guide to the Gulf South, old libraries. Bookmark the permalink.