Posted on February 2, 2016 by thegumbodiaries 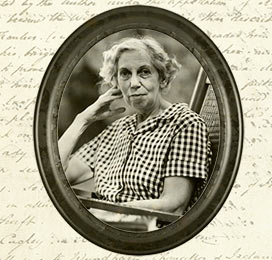 Eudora Welty stories rarely feature lavish food scenes, so selecting the right gumbo to serve Miss Eudora meant turning to her personal life for clues. The Pulitzer-winning Mississippi writer surprised me. She might not write about food, but recipes were a formative part of her early writing life. Much of that history, however, is stashed away away in government archives.

As a young writer during the Great Depression, Welty worked for the WPA’s Federal Writers Project. One of her assignments was covering events for “America Eats.” In this ambitious project, writers across the country documented America’s social and cultural relationship with food and eating. Writers including Zora Neal Hurston, Saul Bellow and Welty visited events

Chicken and rice boiled together in one pot in Florida. Photo Credit Stetson Kennedy, “America Eats,” Library of Congress.

The project was abandoned when times got better, so the unpublished photos, recipes and recordings are archived in the Library of Congress while others are stored in state and university archives.

Welty combined the Mississippi recipes she gathered along with descriptions of the events into a cookbook “Possum and Pomegranate” (featured on page 4 of Mississippi Folklore) . It and 300-plus other manuscript pages from the project are in the Mississippi State Archives. Welty transcribed recipes for Barbecue Sauce, Beaten Biscuits, Catfish, Fish Courtbouillon, Jellied

Apples, Lye Hominy, Stuffed Eggs, Potato Salad and Spanish Rice, plus Okra Gumbo from Biloxi and Seafood Gumbo from Pass Christian. I suspect Miss Eudora would have preferred the Okra Gumbo because she liked tomatoes. The seafood gumbo has tomatoes but is a big undertaking – it makes three gallons and calls for 100 oysters – at lot to cook for a person living alone.

Later in life as a patron of the arts living in Jackson, Mississippi, she shared her favorite recipes for benefit cookbooks. One such is an Onion Pie recipe from fellow writer Katherine Anne Porter published in the Jackson Jr. League Cookbook. Some of her favorite sweet recipes – cocoons (cookies), candied pecans, lemon dessert and white fruitcake – appeared in the Jackson Symphony Cookbook. The Atlantic published her wickedly hot potato salad recipe, which some people swear is a perfect side for gumbo – any kind of gumbo.

A You Tube Visit to Eudora Welty’s Home